Friday
The only thing worth mentioning from yesterday was the postcard from Lena, posted in Copenhagen.
Yesterday was pay day but it hasn’t done my finances much good ‘cos I’ve got to buy a suit and a coat and I don’t know which to buy first. I’ve convinced myself I need a suit for Ron and Brenda’s wedding. I think I will get a hat as well and be madly sophisticated for a day.

Alan arrived at the house at 7-ish this evening waving tickets for King Kong. I was so pleased. He said he had had no trouble at all to get them. Later we found out why. The theatre was only half full.
We went to Charing Cross by underground train and we thought we were going to be late because we didn’t reach there until 7.50. I really felt somebody important when Alan called a taxi. ‘Princes Theatre.’ he said and we were off. We got there with about 2 minutes to spare.

The show was jolly good. There was a surprisingly big cast and the stage was full most of the time. The colours were magnificent. The songs were mostly spiritual-type. I really enjoyed the whole thing. 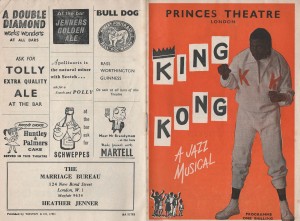 At the end of the show we went to a restaurant for something to eat then walked around a bit until we found an underground station.

It was a few minutes to 12 when we reached Heathway station. Alan had been worrying about how he would get home and asked the ticket collector when the last train went back to town. When the man replied that we had passed it between here and Becontree Station, the poor darling’s face dropped.

Alan was expecting to walk home and I was getting a bit worried because there was a slight fog when he left, walking towards Martin’s Corner. He told me later that he was lucky enough to catch the all-night bus (they apparently run every hour) and it took him right into East Ham.
It was hard to realise that tonight was only the second time ever that he has taken me out and only the eleventh time we have met. And during those 11 meetings he has proposed, I have accepted and we’ve fixed our engagement date. Ain’t love grand!

Saturday tomorrow. Thank goodness. It’s a swizz that I’ve got to work and I’m post waiter and the Lady’s in. Ugh!