When Alan arrived at 7.30 we settled down to a nice domestic evening. I’ve been having fits of conscience about the baby clothes I am knitting for Marje and decided I couldn’t afford to waste one of my two supposedly ‘free’ evenings a week. I got a few rude comments about the bootees I was knitting but they were funny rather than offensive so I let them slide. 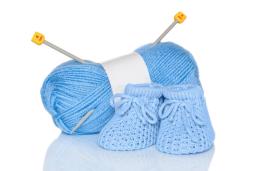 As per usual Alan suggested a drink before he had been in for ten minutes and as ginger was about the only mixer we’d got left, I had a whisky. That is, I had it until Jennifer kicked it over. The house cloth got more of it than I did. We played records and Radio Luxemburg most of the time. I sacrificed my ‘best tele night of the week’. One thing I couldn’t miss was ‘My Three Sons so, at 8 o’clock we adjourned to the back room, donned our glasses and proceeded to ‘watch tele’. Jennifer was in the bath. Mum was knitting and Dad was just sitting.

About 8.20 there was a terrific loud knock on the door. As is usual when there is an unexpected knock at that time of the evening nobody moved. We just sat and looked at each other. In cases like that people would think our door knocker was never used. Dad was first to get up and everyone sat straining their ears. Not a word was spoken.

We heard the door open and a lot of laughing and giggling and amongst it all I heard my name mentioned so I got up and left the room, wondering what on earth was going on. I was in the passage before I recognised Pat’s voice. Then it all came flooding back to me. This morning I had mentioned that Alan was coming over for an evening in and she said as she and Robin had no definite plans could they come over. She is just as curious to meet Alan as I am to meet Robin. I was delighted with the thought of a general get together and had told her that they would be very welcome.

When she had thought about it further she had doubts. Robin probably would get to her house quite late or he may have made alternative plans were two of the doubts. It seemed he arrived at her house, asked if she had anything she especially wanted to do, then suggested coming over to see me. And that was before she had even mentioned her idea.

There was lot of laughing and joking when they arrived so I didn’t see much of ‘My Three Sons’ after all. Although we did sit it out in the back room until it was finished. Then we went behind the curtains into the front room and played some more records and had a good laugh. Alan played host. I just sat and knitted while he put the records on and got the drinks. He remarked afterwards, ‘didn’t I think it was good of him, to play domesticated in front of my friends?’ (Cheek)

They had to leave about 9.15 as it would take them over an hour to get home and they didn’t want to rely too much on the buses. It was a short meeting but at least I have met Robin and Pat has met Alan so we each know who we are referring to.

Alan and I went to the gate to wave them off and I felt very homely and grown up. It will be nice when we will be able to wave people off from our own front door in two or so years’ time. I wonder if I will be any good at it? My own friends, yes. I think I will be ok there. But relations and Alan’s friends and relations. I don’t fancy that very much.
When it was time for him to leave for the last train Alan told me he had a present for me but he had come away in such a rush that he had forgotten it. No matter how much I wheedled I couldn’t get what it was out of him.